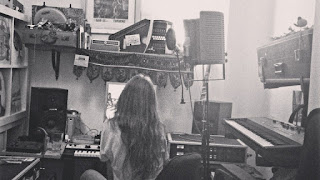 Despite the fact that I'm typing this on the last day of January, I'm still saying "Happy New Year" to you all. Feel free to hate on me if I'm still saying it come Easter Sunday, but as for right now, 2016 is still young.

I always like to start off a new year of Radio BSOTS by looking back at the previous year of music and things are no different this time around. There are quite a few releases that came out within the last four months of the year that I think were exceptional and shine some light on those that we should keep tabs on in 2016, particularly Mizan K and Sarah Williams White. If you've been listening to the show for a few years, you know of my love for Harleighblu. Word has it that she'll be working on a full-length this year, which has me really excited. Beyond that, the new album from Chi Turner was originally scheduled for a February 7th release, but dropped early on his Bandcamp page. It's a really special one, certainly his best release to date.

Other highlights in the show include Satele's drum and bass take on A Tribe Called Quest instrumentals, the feverish remix of Moresounds provided by Clap! Clap!, the self-love affirmed by Rat Habitat, the melodic perfection of Prefuse 73 and My Panda Shall Fly, and the cathartic energy of Young Fathers. And let's not even get into how relevant a song "Don't Poison All The Water" by Mo Kolours is in light of the water crisis in Flint, MI.

There's so much more that I could say about the music, but it's always best to let it speak for itself. I invite you to listen and (hopefully) enjoy.

Posted by Jason Smith at 6:38 PM No comments: